This is one of the standard pair trading models described in literature. It is based in ratio of instrument prices, moving average and standard deviation. In other words, it is based on Bollinger Bands indicator.

Since Nov 27th 2014, this model also supports additional RSI filter you can use in addition to Bollinger Bands method.

We currently support only dollar-neutral version of this model, which means we allocate same amounts of margin to both legs based on current prices at the time of opening the position.

There are certain possible approaches how to interpret model statistics in order to make trading decisions. For entering position, we used to call them entry modes. This is the list of them and description how they work:

Why do we have the simple entry mode? In normal situations and backtests, it gives same results as the uptick mode. But the difference comes up while trading multiple pairs in portfolio. The simple mode allows you to jump in the position immediately after a new slot is freed, regardless of the previous Z-scores.

Which entry mode is better? Hard to tell, sometimes the uptick, sometimes the downtick. You have to do your homework and decide, which idea suits your trading style better. In general, uptick/simple mode is more aggressive, as it does not wait for first signs of spread mean reversion.

For exiting position, we always use only these simple rules: 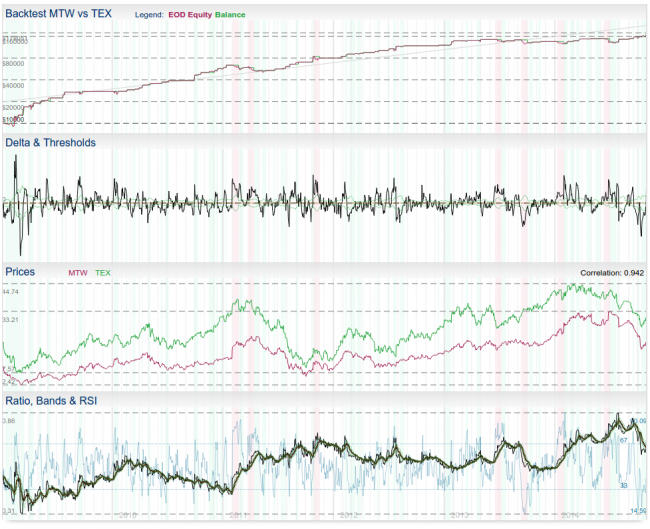 You can choose from these moving average algorithms:

Which one is the best? It depends, you have to test for yourself. They mostly differ in the term of memory and how fast they react to changes. Industry standard and the default is EMA. We suggest to try all of them on some sample pair to see how they work.

You can combine the Z-score/Bollinger Band model with RSI indicator applied on the ratio R(t). RSI filter will be automatically enabled if you set RSI threshold to other value than zero. RSI filter is combined with the Z-score rules using AND operator (both entry rule and RSI entry rule must be true to open a position).

You can also change the RSI period if you want (default period = 15).

RSI Threshold is value between 0 and 50. Because RSI indicator value oscillates between 0 and 100 (where 50 = mean), your threshold value is just used to set real thresholds for RSI:

Useful hint: if you want to control entry rules just by RSI, you can set Entry Mode to simple and Entry Threshold to some low value. 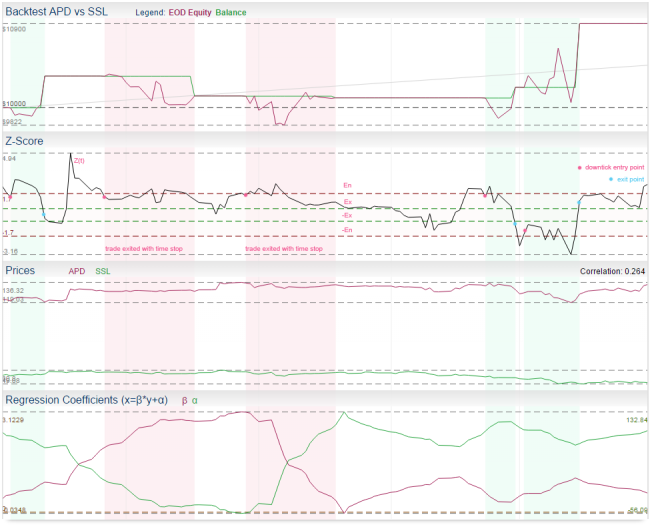 Residual mode is based on linear regression. In literature it has been also referred to as the cointegration approach. Linear regression of both stocks is constructed in order to fit a linear relationship between both instruments and estimate its best parameters using the OLS method (Ordinary Least Squares). Then, standard deviation is applied on the regression residuals to estimate its statistical properties and calculate Z-scores.

This particular implementation is very simple. The regression is constructed using floating window of a fixed period, the same period is used for calculating the standard deviation.

We currently support only dollar-neutral version of this model, which means we allocate same amounts of margin to both legs based on current prices at the time of opening the position.

There are certain possible approaches how to interpret model statistics in order to make trading decisions. For entering position, we used to call them entry modes. This is the list of them and description how they work:

For exiting position, we always use only these simple rules:

This model is based on Kalman Filter. In this case, the filter is used here instead of linear regression to determine proper hedge ratio, deviation from the mean and the standard deviation of the spread. The advantage is that this filter is superior when dealing with noise compared to OLS or TLS methods, also it does not have any lookback period to optimize. The disadvantage is that is has another parameters (like δ) to find out.

We strongly recommend to read more details about Kalman filter applications in pair trading in this book.

While Kalman Filter also estimates the standard deviation on the fly, our implementation also supports a possibility of having an auxiliary standard deviation indicator applied directly on the forecast error time series. The advantage is that you get less sensitivity on the δ parameter, but on the other hand a new lookback parameter is introduced.

Kalman Model has too sensitive parameters which prevents it to be traded in reality. This model is provided only for education purposes - to be able to see how parameters affects its performance. Use Kalman Grid model for any serious trading.

For Kalman Model, we support both dollar neutral (equal dollar amount invested to each leg) and beta neutral regimes.

Same as in Residual Model.

This model is provided for education purposes only.

After one year of experience with the Kalman-grid Model (v1) and researching machine learning principles, we have spent weeks of additional work on developing new version of Kalman Grid model, redesigned from scratch. Kalman Grid v2 is now the most advanced model PTL offers.

This model brings the superior performance of Kalman filter design, but it also deals with all the flaws of Kalman and old Kalman Grid v1:

This model rendered the version 1 obsolete and completely replaces it.

How does it work? Instead of single strategy (and single Kalman filter), the whole grid of Kalman filters is evaluated by a proprietary system at the same time. Then, machine learning principles are applied to rank particular Kalman filter performances. Another algorithm is then used to figure filter outputs (slope, intercept, standard deviation) from the whole grid. The whole system actually behaves like a single Kalman filter, but with no need to provide any parameters.

Main advantages of this model:

Issues of this model:

For Kalman Grid Model, we support both dollar neutral (equal dollar amount invested to each leg) and beta neutral regimes.

Same as in Residual Model.

This model is very similar to Kalman-grid model, it is like his younger brother. The main difference is that the simple A.I. of this model is not trying to work with profit (which is problem with certain kind of pairs). Instead, it justs tries to find optimum δ (transition covariance) of the Kalman filter together with the entry threshold to match the margin usage target. An example: you can set this model to try to optimize everything so the strategy spends 50% time in position (so if you traded one year, the model spent only half a year in positions). Or you can say the average slot usage (margin usage) is 50%. This is useful for trading whole portfolios of Kalman-Auto based strategies, so you can fine tune the diversification inside the portfolio correctly.

Advantages of this model:

This is the model you need if you don't want to spent hours of optimizing parameters. You just tell it to trade and stay in position 60% of the time and that's it. On the other hands, it does not match in profits with Kalman-Grid for very good pairs (but actually it has similar performance when you divide the profit to the margin usage).

Please note there is no regulation feedback loop inside, the self optimization works just with ring-buffer with follows the current point and it is used for finding best parameters. So do not expect you set the target to 80% and at the end you get 80% portfolio usage. The good working range is <40, 60>.

Example: Visa/Mastercard backtest with Usage Target set to 60%. Notice the % Days In Trade resulted in 64.9%.

For Kalman-Auto Model, we support both dollar neutral (equal dollar amount invested to each leg) and beta neutral regimes.

Same as in Residual Model, but: